We were delighted to co-sponsor this year’s “The Woking Economy: Report & Accounts initiative” compiled by Decision Magazine.   The Report demonstrates why Woking is a great place to do business; a hub of energy, ambition and growth.

Did the Woking economy grow over the last year? Were the companies headquartered in the borough more profitable than in the previous year?

The answer, as is often the case with statistics, is both yes and no.

Those Woking companies which file full accounts generated a combined turnover of £8.5 billion, but add in the town’s resident goliath, SAB Miller; and that figure rises to £23.1 billion. That represents either an increase of 6% or 1.6% without SABMiller compared to the previous year.

Profits before tax totalled £379 million, a fall of 11.8%, but with SAB Miller factored in, the figures were £3.6 billion and a slight reduction of 1%.

The results were announced at a reception for company directors which we hosted with our co-sponsors: Arcom IT; Hamlyns LLP; and Woking Borough Council; 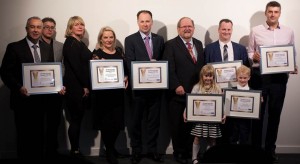 The winners (pictured) were: